Time became a blur.
I drifted in and out of consciousness. I'd like to say that I was blissfully unaware of my surroundings, of the pain, of the poking and prodding. That wasn't the case. I'd try to hold on to voices and images, but couldn't respond, couldn't make a coherent picture of it in my mind, couldn't quite get the meaning of the words that were spoken.
When I'd stop pushing to re-enter the world of the living, I'd float on that dark sea, alone. Then, unexpectedly a light dawned over the horizon.
I awoke. I didn't expect it to last, but it did. Consciousness held on to me and it didn't let go this time.

The first thing I saw was Jupiter. He was standing on the left side of the the bed, his hair ruffled and a hopeful smile dawning on his lips. A wave of affection passed over my limp senses, he was still there...he hadn't abandoned me..
There was someone standing next to him. I gently turned my head to see another tall man standing at the foot of the bed. It was Jupiter again...but not quite the same...this man was about 20 years younger.
What a strange sickness this was. It made me see double, but in different time zones!
The effort of trying to analyse this befuddling situation strained all of my energy. And I suddenly felt immense thirst. I tried to speak my first word.
- Ohter...
The old Jupiter looked at the young Jupiter puzzled.
- I think she means "water"! said the young Jupiter
The old Jupiter hurried to my bedside and poured me a glass of water. The young Jupiter didn't move.
I felt my head being lifted and my lips touching a cold, smooth damp surface.
Then, I passed out. Again.
Posted by Lea at 6:46 AM 2 comments:

It wasn't the pain. It wasn't the whooshing sound in my head. It wasn't the cool wetness of the towel that was placed on my forehead. No, the first thing that alarmed me was the tone of the various voices that drifted in and out of my hearing. Though my eyes were shut I could feel the concern, even alarm in their eyes, the rigidness of their gestures and the stillness of their fear in the room.
Looking back, even at that moment It didn't occur to me that something was seriously wrong, but that something was not quite right.
In my mind the darkness of the shadows deepened and lengthened. I backed away from them awkwardly and limply, but night accelerated and engulfed me. I found myself floating on this dark strange new sea and tired as I was, I let go...You see, I knew that I had no choice in the matter and having no choice but to surrender is sometimes the scariest thing in the world. I was not me anymore, the determined me, that wouldn't go out without a fight. There was no battleground, no monster that I could attack.


"Is she going to recover?"
"Too soon to say I'm afraid, we still don't know what we are dealing with"
"Don't worry so much, little Lea is a fighter..."


But I wasn't a fighter on that dark sea. I was a paper boat thrown to the mercy of the four winds...

The tide that turns

I didn't get to ask Jupiter my questions.
I went to the tree where I thought I may find him, but in his place I found a neatly folded note : "Back in an hour, leak at Monastery". Oh well, I was feeling oddly tired and still shaken by the strange letter I had received. I might as well have a rest and wait for him.
So I sat under the tree, on the cool moist grass. I let my mind wander and trace my thoughts, like you would a contour of a stone. My life seemed whole, yet I knew deep down, I yearned for more. I loved my work, the birds, the garden ,the island...But...forever aching for something that was unattainable, probably because I didn't even know what that something was...it was vague but constant.
These and lesser thoughts danced their awkward little dance in my head and after a short while I drifted into sleep.
I lay there, naive, in total ignorance of how things would shift and change very shortly. How the bright light of that afternoon would recede and the shadows would lengthen and seem to be never ending.

A letter from the East


I pride myself in believing I can read between the lines.
When someone says "Oh no, it tastes delicious but I just had my supper and couldn't possibly have
another bite!" I know that what they really mean is that the pie
I have just served them could have
done with more sugar (or less, if that day I was preoccupied with
something else while baking it...).
I know that if someone says "have you done something different to your hair Lea?" it really means "You look like you did when I last
saw you and I would like to say something nice about your appearance but can't for the life of
me think of anything - you wear the same kind of thing day in - day out!"
But this letter has made me rethink
the strength of that particular ability.
Nicholas has that effect on me
and while it is refreshing and adds
a certain spice to our conversations, I hate not him being here so I can ask him a few straightforward questions and get some simple straightforward answers...
Who is this "charming Sara"?
What is so special about these
Eastern Isles? What has he found
that he thinks he needs to talk in
riddles about it? How on Gods earth does he think I'll be able to travel to meet him? And what are these Passage Way Poems, that he believes have enchanted me?
The latter I suppose I can find an answer to. Jupiter can at least help me solve that one...Now I only need to find him.. last time I saw him he was halfway up the cherry tree making affectionate sounds to some newly hatched chicks.
I'll take him some tea and pie. I hope he has not just had breakfast.
L.
Posted by Lea at 2:54 AM 2 comments:

The Memory of Ink 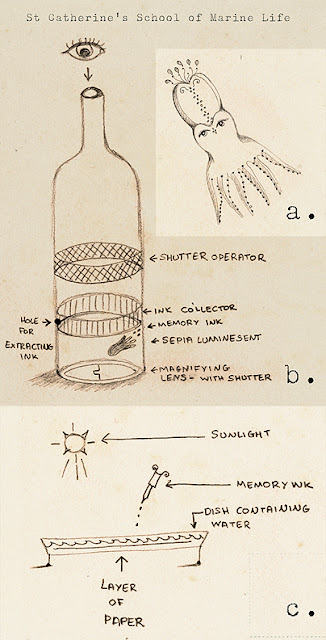 I have previously written about Jupiter's strange belongings. He keeps them all tidily tucked away in the big wooden trunk in his sleeping quarters most of the time. But tonight he endeavored to show me one of the curious items hidden within.
He calls it an Image Collector. It has the shape of an ordinary bottle and can be used by those who find it difficult to describe something in detail to obtain an impression of just about anything for their personal records.
The contraption was invented by one of his fellow countrymen, who was a teacher of Marine Life at the local school. Jupiter explained that the man had been fascinated by some tiny marine creatures of the Sepia family, that were extremely sensitive to light. Every time the tiny squid were exposed to even the tiniest hint of light they would be so disturbed that they would expel  a liquid ink, that was brownish in color but also curiously luminescent.
He experimented with the oil based ink, only to find that when dropped onto a paper surface and exposed to heat the ink would spread like tiny lichen onto the surface and create an image, strangely reminiscent of the environment that the squid were in, at the time of their exposure.
He proceeded to study this even further, and hence discovered the qualities of this amazing new substance...some how this oily ink had it's own memory, and given the right conditions it spread in a thin layer and revealed this memory.
All this was extremely fascinating to me!
But I was skeptical. That is, until Jupiter showed me one such image he himself had produced using the contraption. 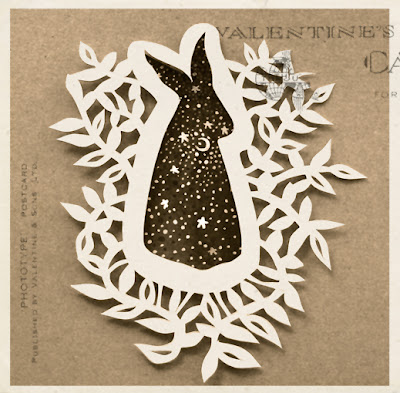 Here it is for you Dear Reader.

The image he captured using the ink is a delicate paper representation of the Constellation of the Hare that is on display in the House of Stars on the island of St Catherine's.

Friends of the Aviary